Tips to Beat the Heat While You DIY 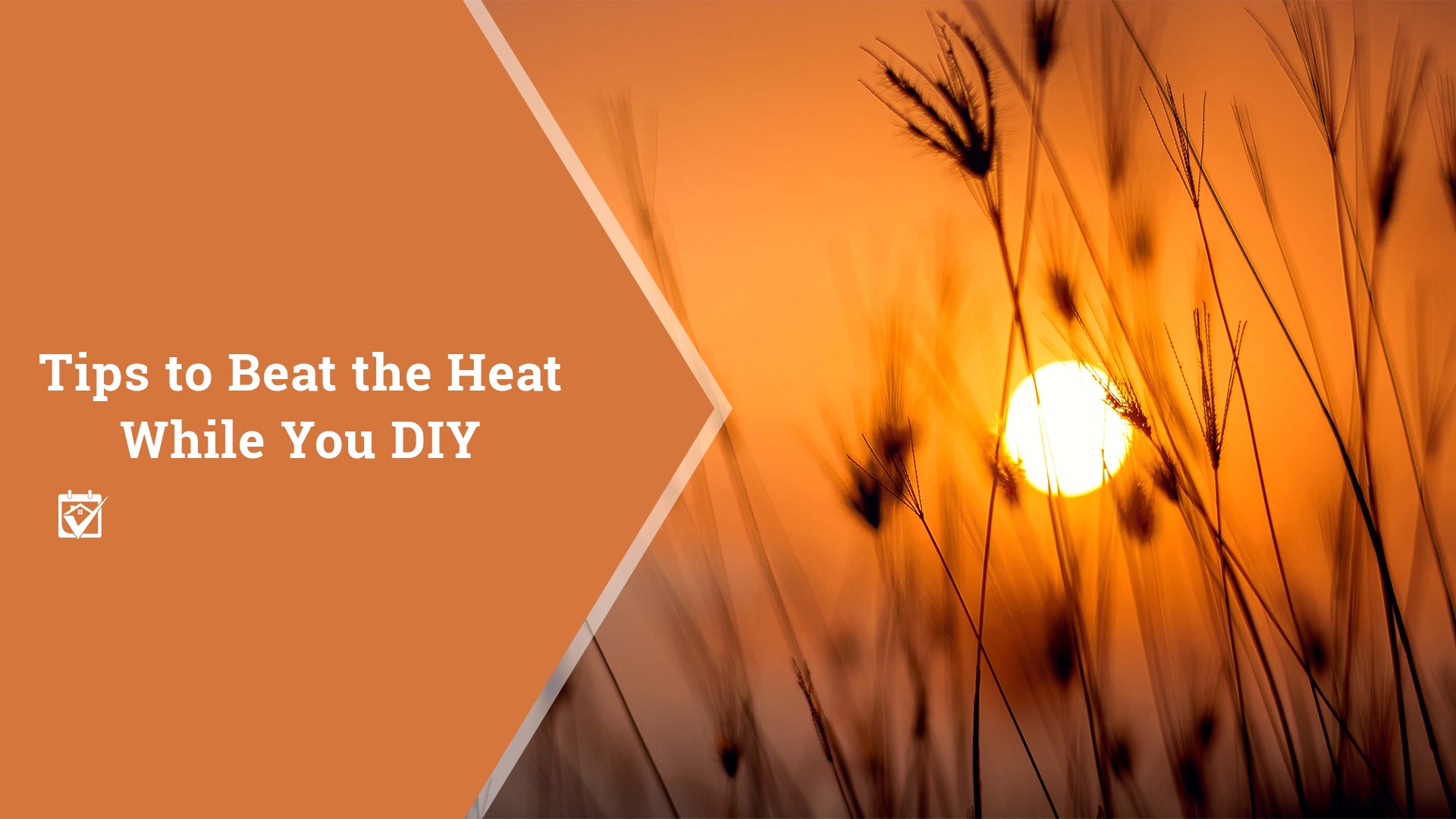 Obviously, every summer sees higher temperatures than other seasons. In recent years, though, we’ve experienced some of the hottest summers on record. Too much heat and sun exposure can cause a variety of serious health issues including heat stroke and heat exhaustion, so it’s important to play it safe when you’re working out in the sun. Here are just a few things that you can do to avoid heat-related problems.

Stay Hydrated
This one should be obvious, but you’d be surprised at how many people don’t drink enough during the hot summer months. Increase your water intake before, during and after any periods where you’ll be out in the heat and sun. As hard as it is to hear, you should also try and avoid coffee, tea and other drinks with caffeine before going out in the sun as well, because the caffeine content can actually make you lose more water. Avoid sugary carbonated drinks and alcohol, though the occasional sports drink or other beverage with electrolytes won’t hurt, since your body needs electrolytes for proper functioning, as well.

Take Your Time
Depending on the conditions you’re used to, it can take anywhere from 7 to 14 days for your body to get used to high temperatures. If you’re going to be working outside a lot in the heat, then you should increase your heat exposure gradually. If you’re used to air conditioning, trying to take on a full workload outdoors can significantly increase your risk of heat-related health problems. Instead, try tackling smaller tasks with big breaks between until your body gets accustomed to being out in the sun.

Dress for the Weather
When it’s hot, it’s tempting to wear as little as possible. This can be a bad idea when you’re working outdoors, though. Not only does less fabric increase your risk of sunburn but it can also make you more likely to experience some sort of injury when you’re working. Contrary to what might seem logical, you should cover up more when working out in the heat. Cover as much of your skin as possible with light-colored, lightweight material that’s loose enough that it doesn’t cling to your body. Choose a fabric that breathes, or clothes made of wicking material designed to help keep you cool. Don’t forget a hat and sunglasses or other eye protection, either. Not only will this keep you from getting burned, but it will also slow down the rate at which your sweat evaporates (which is a good thing, as it will keep your body cooler than sweat that evaporates quickly.)

Build Some Shade
One thing that can make a big difference when working outside is having a little bit of shade to take a break in. In some cases, you’ll have plenty of trees or other overhangs to create shade for you. If you’re not that lucky, build a small shelter from the sun using some posts and a tarp or other material that can block the sun (making sure that you only cover the top and not the sides to allow for airflow.) If you really want to maximize the value of this cool-down spot, set up a fan that you can turn on to create a little bit of artificial airflow, if there isn’t any breeze when you stop for a break.

Watch for Warning Signs
Common signs of heat-related illness include greater-than-expected amounts of sweat, confusion, lightheadedness, slurred speech, dry skin, increased body temperature and loss of consciousness. If you start to notice any of these issues, get out of the heat immediately and seek medical assistance, if necessary. Since some of these symptoms can be hard to identify in yourself, it’s also not a bad idea to have a friend or family member come check on you at least once an hour to make sure that you aren’t starting to show signs of overexposure.

Need an Extra Hand?
One way to keep from overdoing it in the sun is to bring in an expert to help get the job done. As days start getting shorter, this is a great time to sign up for a free account with my HomeKeepr and find the pro who can help you wrap up all of your outstanding summer projects. Want to know how to sign up? Let me know and I'll get you set up!